In December, 2010 there was another “racial incident” in Sanford, Florida. An African-American homeless man named Sherman Ware was attacked without provocation by Justin Collison, the drunken son of a white Sanford police lieutenant... and it was all caught on video.

Sherman Ware went to the hospital with a concussion and a broken nose, but the Sanford Police initially swept it under the rug, and the NAACP wasn't interested. But a young couple were outraged, and started a “Justice for Sherman Ware” campaign. Justin Collison was eventually convicted of misdemeanor battery, and paid Sherman Ware's hospital bill. The Sanford Police Chief resigned.

And who was that young couple, crusading for justice for the African-American victim? It was none other than George & Shellie Zimmerman.

I'll bet you didn't know that, did you?

Zimmerman is a serial do-gooder. In addition to being a neighborhood watch volunteer, he was also a volunteer mentor/tutor of African-American children.

I'll bet you didn't know that, either, did you?

The reason you don't know such things is that NBC, CNN, etc. were too busy lying about Zimmerman, doctoring the recording & transcript of his call to the police, smearing him as a racist, and inflaming racial tensions.

Martin, who wore gold grillz, used the Twitter handle "NO_LIMITS_NIGGA,” and was apparently a small-time drug dealer, caused his own death when he attacked a stranger who he didn't know was armed.

Martin was in the neighborhood because he was staying with his father at his father's girlfriend's house, 240 miles from his Miami home, while serving a ten-day suspension from high school (his third suspension of the year), after being caught by school officials with stolen jewelry and traces of drugs. Zimmerman was doing what Neighborhood Watch volunteers do: watching a stranger in the neighborhood who was behaving oddly (until he disappeared from view), and reporting it to the police.

Martin (5'11" or 6'0") apparently didn't like the way that “creepy-ass cracker” had been looking at him a few minutes earlier, so he surprised Zimmerman (5'7"), threatened his life, decked him, broke his nose, and repeatedly smashed his head against a sidewalk, as Zimmerman yelled for help. No one came to Zimmerman's aid, so he finally drew his concealed handgun, and shot his assailant once in the chest. 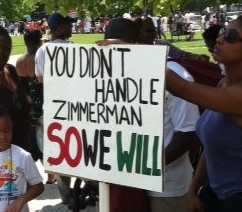 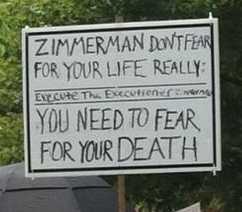 1. Here is the full transcript of George Zimmerman's call to the police (with links to the recording), a few minutes before Trayvon Martin assaulted him:
http://tinyurl.com/ZimmermanPoliceCall

3. This is an article on George Zimmerman and the Sherman Ware case:
http://www.thegatewaypundit.com/2013/07/zimmerman-initiated-a-justice-for-sherman-ware-campaign/

4. In this article you'll learn that when George Zimmerman was in High School he took an African-American girl to the prom, and later he started an insurance business with an African-American business partner. I'll bet you didn't hear that on NBC, either, did you?
http://freedomoutpost.com/2013/07/so-you-think-you-know-the-truth-about-george-zimmerman/

5. This article has a very detailed minute-by-minute chronology of what happened the night Trayvon Martin died:
http://www.americanthinker.com/2012/06/what_the_media_choose_not_to_know_about_trayvon.html

8. Bill Whittle's video commentary skims the evidence that most of the press refused to report:
http://www.youtube.com/watch?v=Ebu6Yvzs4Ls

Here's an abbreviated version of this web page, as a printable flier:
http://tinyurl.com/zimmhistpdf

Permalink to this page: http://tinyurl.com/zimmhist