The point of the bill is to conform policy to science

Climate Movement activists are pushing scientifically ungrounded policies, which would have severe economic consequences for North Carolina. HB-819 represents "push-back," to force policymakers to conform policy to what the science really tells us about sea level rise.

Mankind has been driving up CO2 levels substantially for about 3/4 century. We've raised average outdoor CO2 levels from about 300 ppm to nearly 400 ppm. (Indoor levels are often several times that.) But over that time period, the rate of sea level rise hasn't increased at all.

NC's best tide gauge is the GLOSS-LTT gauge at Wilmington, which has been measuring sea level continuously since 1935. Over it's full history, the rate of sea level rise at Wilmington has averaged a glacially slow 2 mm/year (about 8 inches per century). 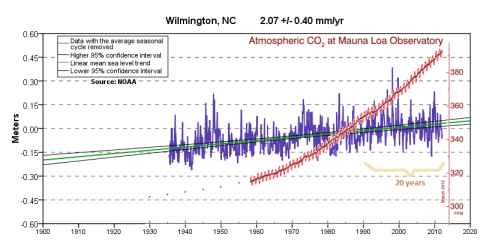 CO2 levels are in red, and sea level is in purple. If CO2 were driving sea level rise, then the purple graph would curve upward at the right-hand end, like the CO2 graph. (Click on the graph for a larger version.)

There are hundreds of high-quality tide gauge records around the world measuring sea level. Because the crust of the Earth is constantly moving, these tide gauges show widely varying rates of sea level change. At some locations, sea level is rising, at others it is falling, but the average is a very slight increase of between 1 and 2 mm/year. (The geographically-weighted average and median of the sea level trends at 159 NOAA-selected GLOSS-LTT gauges are both +1.1 mm/year. The widely-reported figure of 1.7 or 1.8 mm/year includes the addition of an average of about 0.7 mm/year "glacial isostatic adjustment" (GIA) from computer models.)

Most of these tide stations show no evidence of any acceleration (increase) in the rate of sea level rise over the last 3/4 century. Some (like Wilmington) show slight decreases, others show slight increases, but the best studies indicate that there has been no increase in the average rate of sea level rise around the world, and most of the best studies show a slight decrease.

In other words, all that additional CO2 in the atmosphere hasn't increased the rate of sea level rise at all.

We also have 19 years of satellite altimeter measurements of sea level over the open ocean. That's too short to draw definite conclusions, and there are major problems with the quality of the satellite data, but it is nevertheless worth noting that, like the tide gauge measurements, the satellites seem to show that as CO2 levels go up, the rate of sea level rise is decreasing, rather than increasing:

For years, Climate Movement alarmists have been predicting that, as a result of what MIT climatologist Richard Lindzen calls "gross exaggerations of highly uncertain computer projections combined into implausible chains of inference," higher atmospheric CO2 levels should cause the rate of sea level rise to increase dramatically. But the data contradicts that prediction.

We've done the experiment and we know the result. When mankind began driving up atmospheric CO2 levels (with dramatically beneficial effects on agriculture) the post-LIA acceleration in rate of sea level rise ceased. The last ~3/4 century of increasing CO2 levels and emissions have caused no increase at all in the rate of sea level rise. It is irrational and unscientific to expect that repeating that experiment over the next 3/4 century will have a significantly different result. The best prediction for sea level in the future is simply a linear projection of sea level in the past. For the southern NC coast, that's a measly 7 inches of sea level rise by 2100 (and a little over twice that for the northern NC coast, due to land subsidence there).

Regulatory rulemakers create a type of "law" which impacts citizens just as much as bills passed by the Legislature, but often with considerably less direct citizen input than is possible when laws are enacted by legislators who must stand for election every two years. There's real danger that rulemakers, under pressure from special interest groups, will subordinate geophysical science to political science, codifying scientific nonsense into North Carolina's body of rules and regulations.

Nobody should want that! This year, the DENR is dominated by Democrats and the NCGA by Republicans. But in a few years it might be the other way around! I think that the rulemakers should conform NC's rules regarding land development, setbacks, structure elevation, insurance, etc., to actual scientific evidence, rather than to the political winds of the day. Don't you?

By the way, do you know how long a sea level record needs to be to establish a robust trend? About 60 years; 50 at the very least! That's what the research tells us. See:

Dr. Nicola Scafetta (Duke U.) made this point (in private communication): "...an interval of just 30 years is the worst that can be chosen because it is half 60-year cycle, and it happened that for SLR the period 1975-2005 had this 60-year cycle during its warming phase (the temperature warming phase was about 1970-2000). So, if you fit the last 30-40 years you get an overestimation of the real trend."

Yet the CRC Science Panel's 2010 Report (which recommended a 39 inch SLR projection) used just 24 years of data from a tide gauge at Duck, NC that is severely affected by land subsidence, even through there was an excellent 75 year record available for Wilmington, the only GLOSS-LTT tide gauge in NC. That was just one of the errors in their Report, and not the worst one, unfortunately.